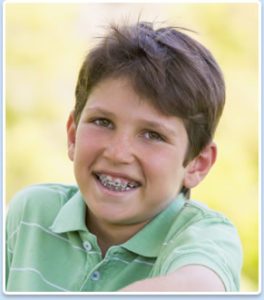 Self-ligating braces are braces that use little metal doors to hold the wires instead of elastic ties. There are many companies that advertise different names for these braces. The most popular self-ligating braces are Damon™, Speed System and In-Ovation. These types of braces have been around for more than 20 years, but they have recently gained popularity as these companies have begun marketing directly to the patients and consumers.

Are they better? The simple answer is no. The more complicated answer is in some ways yes and in other ways no. The most important thing to understand is that braces do not move teeth! Wires move teeth! Braces are simply handles that are glued-on teeth to hold the wires in place so the wires can move the teeth. Teeth move when wires apply gentle, consistent pressure (force) over time. The teeth have no idea whether the wire is being held in place by a metal door or an elastic tie.

What primarily controls the speed of tooth movement is the biology of our bodies. Within our bones, certain cells (osteoclasts) eat away bone, and other cells (osteoblasts) deposit bone as teeth move. This process can only happen so fast and depends more on an individual’s age and genetics than what type of braces they have. For example, a young kid whose bone is constantly changing will have very rapid movement, whereas an older adult whose bone is fairly stable will have slower movement.

The truth is in the research. A significant amount of research has been done over the past several years to compare self-ligating braces to traditional braces. Many of the studies have been done by companies with a financial interest (which means the company that is selling the braces is paying for the study). Those studies are unfortunately not reliable.

Other institutions who do not have a financial interest in the product (such as colleges and universities) have done many studies as well. These are called independent studies. Independent research confirms there is no difference between self-ligating and traditional braces when it comes to speed of treatment. No matter what the advertisements say, unbiased independent research shows they work at the same speed.

Dr. Robert Taylor is extremely particular with his patients and wants them to have the best possible result!!! During his first few years of practicing orthodontics, Dr. Taylor used traditional braces, Damon braces and In-Ovation braces. While there was not much difference in the outcomes, Dr. Taylor noticed the results with traditional braces were a little more detailed, refined and crisp. With the control the traditional braces gave him, he was able to position teeth just a little better. For this reason, he generally recommends using American Master Series traditional braces.

If a patient prefers, Dr. Taylor offers self-ligating brackets in Orem, Utah. To learn more, contact Taylor Family Orthodontics today at 801-226-6611 and schedule a consultation with our orthodontist.

What are you waiting for?